Overview
In our last consultation in April 2017, we explained that our vision is to transform Oxford Street into the world’s best outdoor shopping experience and an unrivalled place to live, work and visit. We received nearly 12,000 responses. There was support, as well as some understandable concerns, and many respondents indicated the key issues they felt we should consider. We have listened very carefully to the issues raised and in the months since then we have discussed our vision with a large number of local residents groups, businesses and others to help us understand such issues in more detail. As a result, we have developed a set of detailed proposals for the transformation of the street and the entire surrounding district. We genuinely believe these proposals respond positively to the concerns raised by some and would enable us to deliver a significantly improved Oxford Street and the wider Oxford Street area for everyone.

Our vision is not simply to transform Oxford Street: the proposals we have developed are for the entire district. They would:
Make it much easier to walk throughout the area
Create beautiful, safe, accessible and inspiring public spaces full of life and spectacle to address some of the very serious and pressing issues of poor road safety and air quality in the Oxford Street area
Support businesses to grow and respond to the district as it transforms and create new jobs
Equally protect and enhance the quality of life for residents in the area
Support the introduction of the Elizabeth line to the area
Our proposals represent one of the most significant investments in central London for many years. This is a once in a generation opportunity to transform a key area in central London.

For the first time ever we are substantially reducing the number of buses in the area. This has allowed us to bring forward these proposals.

Doing nothing to transform the Oxford Street district would mean that traffic and pedestrian congestion on Oxford Street and in the surrounding area would worsen. Transformation gives us an opportunity to address the very poor air quality in the area, and reduce the number of collisions on Oxford Street in which people are hurt. It would give us the opportunity to create a network of truly world-class and inspiring public spaces, in which businesses could thrive and grow. It would deliver investment for transformational improvements to the entire area.

Our proposals set out how we would improve the look and feel of the Oxford Street West district, and changes to how people could access and use the space. All of the proposals are intended to transform the way that the West End feels and functions for everybody. We have made no decisions on whether to proceed and we will not do so until you have had your say and we have had chance to consider the points you raise.
Cllr Robert Davis MBE DL, Deputy Leader, Westminster City Council
Valerie Shawcross CBE, Deputy Mayor for Transport
Mike Brown MVO, Commissioner, Transport for London 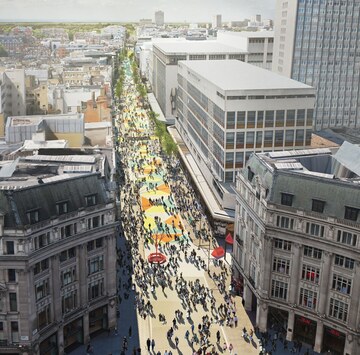